Horror Stories, Awesome Music and Things In My Twisted Mind!

Here we go! An update of things going on!

I just finished my horror story submission for the horror anthology!! Its called A Taste Of Fear and Its about a Boston Heiress being stalked in her mansion by a serial killer. Oh! Did I mention that she can slip into people's memories and occasionally witnesses him torturing women? Well I have now! LOL! I submitted it last night so hopefully she likes it! On the plus side, If she decides its the more terrible thing shes ever read then ill post it here for all my fans to hate as well! *grins*

I recently discovered my favorite new song to write to. "Under My Skin" by Revamped is full of emotions that I associate with the characters in my WIP, The Lost Angels. Never Heard it? You can check it out at this link here...

Under My Skin by Revamped

Now. Ive come to realize how strange and twisted us fiction authors are. I recently wrote a torture scene involving chains, blood and needle while eating Cinnamon Toast Crunch. lol. But i love it. Bringing out my inner-villain was awesome and I fully intend to write a novella in the POV of a villain or a serial killer and I have just the chick in mind! Want to know who? Okies! This is a sneak peek at my current WIP, The Lost Angels! 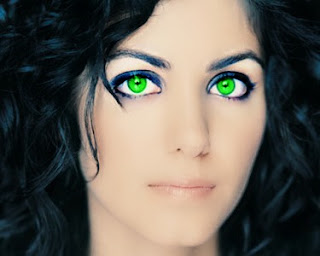 (I do not own this image. This is just a picture of how i imagined Ena to look. I changed the eyes as Ena has unnaturally green eyes that stand out against her pale skin.)


This is Ena Ó Dochartaigh. 17 year old serial killer and all around psychopath! Below is a snippet from her in The Lost Angels! Hope you enjoy!


“WHERE IS THAT LITTLE BITCH?!” Aria roared as she came stomping into the room, her eyes blazing red as they came to rest on Ena. “YOU KILLED ME YOU CRAZY BITCH!” She charged at her but Ena merely watched her with an amused expression.

“Easy, Aria.” Grayson yanked her back by her waist, clutching her close to his chest as she scrambled to get at Ena.

“Dont Easy Aria me!! What the hell was even the point of her killing me?!” Grayson opened his mouth but Ena cut him off.

“I had to make sure you were who you claimed to be.” Aria growled in a very Travis like way.

“I never CLAIMED to be anyone to you and if I had... what if I were wrong?!” Ena raised an eyebrow at her and, with a slight crackling sound, the frozen boy seemed so smile.

“Then you had no business being here and needed to be disposed of.” Aria stopped struggling with Grayson to meet Ena's eyes in a glare as cool and harsh as the tone she had just used.

“First chance I get, Bitch, you will be getting a foot in your ass.” Ena leaned closer.

“You'll never get the chance, child.” They stared into each other eyes for a moment, the silence becoming uncomfortable.

Things got heated there huh? lol. I love writing Ena and hope you guys enjoy reading about her!

Now onto the updates!

Reading: Athena's Promise by Annetta Ribken
Writing: The Lost Angels
Listening to: Under My Skin by Revamped (see link above!)
Snacking on: Doritoes and pepsi!